Lava is more than a play, more than a compelling spoken
word piece; it's Benedict Lombe’s unfiltered, loud, angry,
joyful, unapologetically black female expression – all wrapped
up in a narrative that runs parallel to the history of the western world. 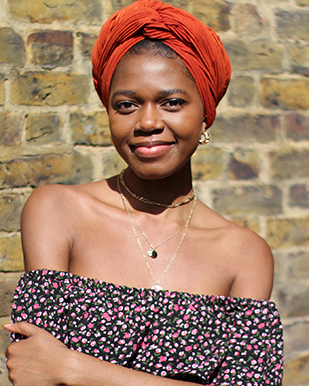 The 2022 Susan Smith Blackburn Prize has been awarded to UK playwright Benedict Lombe for her debut play Lava.  In a special presentation at Shakespeare's Globe in London, the Blackburn Prize judges presented Lombe with a cash prize of $25,000, and a signed limited-edition print by renowned artist Willem de Kooning, created especially for the Prize. Awarded annually since 1978, The Susan Smith Blackburn Prize is the oldest and largest prize awarded to women+ playwrights. Each of the additional nine Finalists received an award of $5,000.

Commissioned by the Bush Theatre during the summer of 2020, Lava premiered to critical acclaim at the Bush Theatre, London, in July 2021, performed by Ronke Adékoluejo and directed by Anthony Simpson-Pike.  The one-woman show won Best Performance Piece at the 2022 Offies (Off West End Awards). Lombe won the Book and Lyrics Recognition Award at the 2021 Black British Theatre Awards.

In Lava, a British Congolese woman, "Her", receives an unexpected letter from the British Passport Office and is forced to confront an old mystery: why does her South African passport not carry her first name?  In her quest for answers, she finds a much bigger story.  Playful and lyrical, moving from Mobutu's Congo to post-Apartheid South Africa, Ireland and England, Lava is a story about unravelling the patterns of chaos across history-questioning nationhood narratives, and the process of naming the unnameable.

Written in the summer of 2020, after the utter exhaustion felt by black people
around the globe, LAVA is what poured out of my soul.

In discussing the themes of her play, Lombe states " Lava is a play that celebrates Blackness in its fullness, showcasing the joy, the struggle, the beauty, and the resistance that has maintained our survival... I wrote it because I wanted to make something that allowed Black people to enter a space and leave taller than when they walked in."

In addition to Lombe, the 2022 Finalists for The Susan Smith Blackburn Prize are:

Daniella De Jesús (US) Get Your Pink Hands Off Me Sucka and Give Me Back (FKA Columbus Play);

Lauren Whitehead (US) The Play Which Raises the Question of
What Happened in/to low Income Black Communities between 1974 and 2004
And Hints at Why Mass Incarceration is Perhaps a Man-Made Disease
And Highlights the Government’s General Lack of Empathy for Poor People of Color
And Dispels the Notion that Our Condition is Our Fault
And Helps Make Visible Why We Riot When We Mourn And also Tells the Story of Anita Freeman
& her Kids
("The Play Which Raises the Question...").

The Susan Smith Blackburn Prize is awarded annually to celebrate women+ who have written works of outstanding quality for the English-speaking theatre. Women+ includes women, transgender, and non-binary playwrights. Each year, artistic directors and prominent professionals in the theatre are invited to submit plays. Each script receives multiple readings by members of an international reading committee that selects the finalists. An international panel of six judges then selects the winning play.

Since the Prize’s founding in 1978, over 470 plays have been honored as Finalists. Many have gone on to receive other top honors, including Olivier, Lilly, Evening Standard and Tony Awards for Best Play. Eleven Susan Smith Blackburn Finalist playwrights have subsequently won the Pulitzer Prize in Drama. The Prize has also fostered an interchange of plays between the United States, the United Kingdom, Ireland, Australia, New Zealand, and other English-speaking countries.

Benedict Lombe is a Kinshasa-born British Congolese writer and theatre-maker based in London. She is interested in wholly reclaiming diasporic stories; without compromise, without apology, and doing it with flair, humour and heart. Lombe has won a Black British Theatre Award and was shortlisted for the Alfred Fagon Award for Best New Play of the Year. She is on attachment with the National Theatre Studio, has been selected to join BBC Drama Room, and is working on new theatre commissions. She has also previously completed attachments with the Bush Theatre and Theatre503. She is currently working with production companies to develop original film and TV projects.